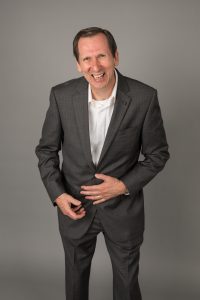 Since the 1970s, Gordon Douglas has appeared on tv shows like Mike Huckabee, the 700 Club, and radio programs like National Daily Daren Streblow Comedy Hour, John Yoast on WBYN, and the Dez Childs Show. He’s performed his comedy routine and shared the gospel at retreats and conferences around the U.S. and the globe. Now, he’s back for Round 2 at our 2023 BNT Tour Preview on January 14, 2023, at Calvary Church in Lancaster, PA! We sat down with Gordon for a little pre-show interview…

An Interview with Comedian Gordon Douglas

Thank you for sitting down with us, Gordon. Tell us a little about yourself, your family, your upbringing? I was born in Lester Pa, right near the Philly airport…In fact, my great-grandmother’s house was the first one at the end of the runway…so, if I talk fast…it’s because you try to get everything in between “takeoffs.” In 1966, we moved out to “the country”    17 miles away…but a world away. Very traditional 60’s family, one older sister, two younger brothers…had my original parents my whole life. Very blue collar, middle class America. Went to a small highschool where everyone knew everyone, and everyone who went out made the sports teams.

When did you know you wanted to be a comedian? I’ve always liked to laugh, and loved the comedians on Ed Sullivan, listening to funny records, and even the new “stuff” on Laugh In with non-stop jokes and silliness. I was quiet, and shy… (at one time). When I went to a new school, I struggled to gain acceptance, wanting desperately to “fit in.” One day, we had an assembly—some Mr. Wizard science guy.   Three of us were picked to go up and assist him. He told the story of a thief who had stolen a precious diamond and that thief was seen entering our school. (He had slipped something into my pocket earlier.) Then, he took a Geiger counter, and waved it over my two associates and me. Of course, when it came to me…it went off…I made some funny faces… and folks laughed. I did some other funny stuff and the whole school was roaring.. and I became “somebody.” I was the funny guy…..that felt good. Making others laugh felt even better.

What makes us laugh?  There is no simple answer. There are all kinds of comedians who do sarcasm, political stuff,  prop stuff, duo’s, physical comedy.  I loved RED SKELTON, who had as much fun on stage as the people did. Simple funny stories and pantomines we all relate to, without a single, offensive word.  Finding a new way to look at something, and express it with a twist or surprise, is a simple formula.

How does your faith play a role into your work globally and in the day to day? “What ever you do in word or deed, do all to the glory of God!” The main purpose of every show I do is to share the gift of laughter and joy, and in some way, point to the real source of JOY.  In churches, I get to share a lot more of my “testimony” and steps of faith. In comedy clubs and corporate settings, I will slip in something of my spiritual journey, But mainly, it is the fact that I do a clean, family friendly show that amaze people. In a dark world, the LIGHT shines brightest.  At home, with my wife and many children…I hope to model the Love of God in how I conduct myself in business – the same. Faith is not just part of my life…it is my life!

What inspires you? I love stories of love and sacrifice, reading biographies of missionaries from time past to the present. It reminds me of our calling, and how blessed we are, how little we’ve endured.

What scripture inspires you in your work? The word “laughter” is not in the BIBLE all that much—but the words “gladness,” “rejoice,” and “joy” are in there a lot! Psalm 126 is a classic…the Lord returns the captives from slavery in Babylon, and their mouths was “filled with laughter, and their lips had songs of joy.” When Sarah found out she was pregnant, she said,  “God has brought me  laughter, everyone who hears about this will laugh with me.”

Testimonies are powerful, seeing the LORD do something amazing, something we thought impossible is inspiring. I sign most of my letters and emails with the phrase “Choosing to Rejoice!” knowing there are folks everywhere going through some tough stuff. But, if Paul can write a whole epistle about JOY from a prison cell, we can find joy anywhere!

What’s your Big “why”? I don’t get the question, I hear it a lot. But I’d say WHY NOT? Why not laugh, rejoice. Don’t ignore problems, but look at each problem as a chance to grow and give God Glory.  We need to stop being surprised that life can be hard. Jesus warned us in John 16: 33 “that in this world there will be tribulation!”  (THAT IS A PROMISE.) But, He continued “BE OF GOOD CHEER!” AND THE REASON: “for I have overcome the world.”

How did the global pandemic affect you? Comedy during a global crisis was never more needed. I lost 99% of my events for two years. I tried comedy by zoom, but that is not the same. I had to find ways to use my gifts, so I made 167 short video’s titled “A Word from the WORD”… 2-4 minute funny videos with me and my grandkids doing skits and object lessons to teach a Biblical Truth.

I understand you had an injury to your voice. Can you tell us about that? I did battle a number of voice issues…In 2004, I was elbowed in the throat at a basketball game. (I compete in the Senior Olympics in running, throwing, and swimming.) But in this 30 and over basketball league, my voice box was shattered. And for two years, I could barely talk. I sounded like Marlon Brando in The Godfather. The things I love to do most (preach and do comedy) were near impossible…BUT GOD, ( two of my favorite words in the BIBLE) did something amazing while watching a TV preacher: he pointed at the screen and said “someone out there broke their adam’s apple—and God is healing it now!…and in 24 hours, I could talk again. I haven’t shut up since!! GLORY TO GOD! I can’t explain it, but I am so grateful. There is a video of it on Youtube if you search: “The comedian who lost his voice.”

Did I hear you wrote a book? Yes, I did: Growth Spurts & Growin’ Pains (the struggles of a skinny studmuffin) is a collection of 39 short stories, 200 jokes, and 150 quotes that highlight the 10 best things I ever learned, and 10 of the stupidest things I ever did. Along with some of the funniest things that ever happened to me. The subtitle is: “Things I wish I knew!  Vol. 1.” There are things I want my kids and grandkids, my church, my neighbors…to know. It is selling really well. 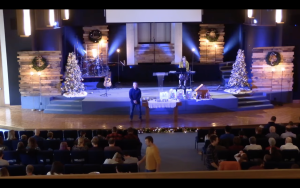 Tell us about your dreams…in five years? Ten? More? I believe we are in the most exciting days since the book of Acts. The beginning of the end! So, I love to tell people…THE BEST DAYS for the CHURCH are still ahead (and the BIGGEST battles…. We need to get ready for both.)! So, in the big picture, I want to tell as many people as I can what God did in my life, so they can experience the JOY of the LORD for themselves…and do whatever the LORD leads me to do to prepare His Bride for the battles ahead, take part in a worldwide revival, and prepare for His glorious return. I have no retirement plans, I love what I do! I am excited to be a part of the greatest move of God the world has ever seen. My two biggest prayers are:  One, Dear Lord – speak clearly so I know what it is you want me to do!; And, two, Oh Jesus, don’t let me miss what You are doing!

I don’t expect it to be easy. I used to dream that I would get on TV, or become famous. But now that I’ve been on TV and seen that world…it doesn’t have the appeal. Though hosting my own radio or tv show does. Less travel and more impact!!

If you could write your legacy, what would you say? Most yearbooks have the “awards” for the smartest student, best dressed, and most likely to succeed. I was never the smarted, or best looking, and would have been voted “Least likely to do most anything good,”  BUT GOD has a plan. So: “Gordon is an example of God’s grace. The Lord does not choose the wise or the strong but chose Gordon. Saved him, gifted him, and used him to bring some joy to a hurting world—with Love and Laughter!

We hope you’ll join us for the 2023 BNT Tour Preview where we’ll highlight memories from last year, new and favorite tours for 2023, eat cookies, and laugh with Gordon Douglas. This is a free event and everyone is welcome!

Some more Gordon Douglas to hold you over until our 2023 Preview: